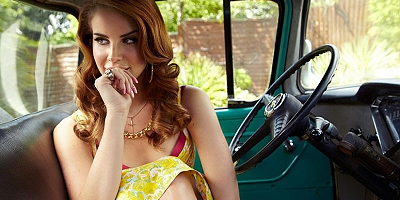 NME made a review of the recently leaked track, National Anthen. You can read it below.

A fragile star with a mysterious dark past, attempting to gain legitimacy in a world that doesn’t want to take her seriously. Sounds familiar, eh? Yes, Lana Del Rey has made the link between her re-tooled Americana and Hollywood’s most mystifying and tragic icons, Marilyn Monroe.

It begins with a sample of the actress singing The Star-Spangled Banner before we’re swept into a newsreader announcing her death, intermingled with JFK squawking about the actress singing Happy Birthday for him. This is a 20th pop culture re-told, Lana style.

That her trail of broken hearts has lead her to MM is logical (from the Tupac featuring ‘Video Games’ video to ‘Off To The Races’ hints of a Mickey and Mallory from Badlands-type bad romance, one of her themes has been the doomed and glamorous) but that she manages to re-imagine the tale in her terms is not.

She almost raps the verses off the beat of the trip-hop rhythm. As she sings of a relationship of a well-heeled man and a blank canvas woman, she invokes not only the dreamland of the monied classes (The Hamptons) and their could-be motto “Money is the anthem of success” but also invokes the spectre of Vietnam with a reference to “The Queen Of Saigon“.

In the chorus, she may baldly re-visit the beat-driven chorus of ‘Born To Die’ but what lifts it is the whiff of something not quite right. “Tell me I’m your national anthem/ Red! White! Blue!,” she sings like a perfect mannequin. It feels less like the evocation of true love and more like something workman-like, as if love is something to clothe yourself in for a moment and then unthinkingly step out of. Which seems like a fairly astute assessment of Kennedy’s view of his relationship with Monroe.

The denouncement at the end comes via Richard Nixon stating: “I’m not a crook,” like the end of The American Dream as well as this unsteady relationship.