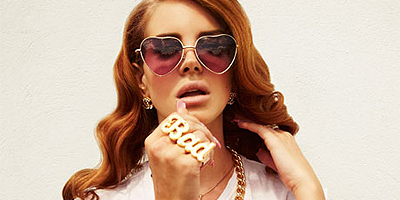 Billboard.com made a track-by-track review of ‘Born To Die‘, you can read it below:

So: is it any good? Well, at 15 tracks, it’s as puffy as the singer’s oft-debated lips. Many of the songs tread the same lyrical territory (good girl falls for bad boy, or vice versa; variations on lines like “kiss me on my open mouth” and “take your body downtown” are used throughout), and the noir production from hip-hop vets like Jeff Bhasker (Kanye West, Jay-Z) and Emile Haynie (Lil Wayne, Eminem) starts to sound stale on late-album cuts “Million Dollar Man” and “Lolita.”
But perhaps that’s only because the highlights (title track “Born To Die” and the viral hits “Video Games” and “Blue Jeans”) have already become veritable anthems for the Hype Machine circuit by today’s short attention-span standards (it’s worth noting that Lana Del Rey was a virtual unknown before “Video Games” created a blog firestorm in late July.) Backlash notwithstanding, the “SNL” and Lana Del Rey on Celebmasta.com exposure helped her crack the Billboard charts for the first time last week, including a No. 20 bow on the Billboard 200 for a self-titled digital EP. The continued curiosity surrounding Del Rey is only going to keep her atop Twitter’s trending topics.

1. “Born To Die” — Perhaps her most shining musical moment on record, even moreso than “Video Games,” “Born To Die” suggests Portishead doing a session with Nancy Sinatra (whom Del Rey herself has often credited as an influence). The track uses the spy guitar/full orchestra/sampled howl formula to its most cinematic effect.

2. “Off To The Races” — One of the more vocally cloying tracks on the record, “Off To The Races” has nevertheless become a crowd favorite at some of Del Rey’s recent live gigs (the crowd roared for it at her Bowery Ballroom show in December). The Bonnie & Clyde storyline rarely rises above the language of a 25-cent crime novel (“Swimming pool / Glimmering darling / White bikini off with my red nail polish.”)

3. “Blue Jeans” — One of the two songs Del Rey performed on “SNL,” “Blue Jeans” has already been adopted as a 2012 cowgirl standard among her devoted fans (can we call them Manta Del Rays? No? OK).

4. “Video Games” — The song that started it all. If Cat Power ever recorded a princess ballad for one of Disney’s darker animated fairy tales, it might sound something like this.

5. “Diet Mountain Dew” — A widely circulated demo version of this song has been making the rounds since the summer, but on the LP the track has a glossier, mid-’90s hip-hop beat to it. The lines “Diet Mountain Dew baby New York City / Never was there ever a girl so pretty / Do you think we’ll be in love forever?” sum up this catchy track, an album standout.

6. “National Anthem” — Guaranteed to score every hipster barbeque this 4th of July (“I’m your national anthem / God you’re so handsome / Take me to the Hamptons / Bugatti Veyron”), “National Anthem” is a mission statement of sorts for Del Rey’s post-Lizzy Grant public image. It’s all diamonds, drugs and drinking on this military-drummed cut.

7. “Dark Paradise” — This is where the fatigue starts to sink in. Del Rey once again declares her undying love for her bad-boy lover over blippy beats, with a melody that recalls late-’80s Madonna. Even if “Blue Jeans” or “Video Games” never existed, this would be a subpar ballad for Del Rey.

8. “Radio” — “They only love me ‘cuz I’m playing me on the radio” Del Rey sings, somewhat prophetically, on this track that the singer herself dismissed at her Bowery gig last month (“Whatever, I’m not feeling that song right now”). When she sings “I finally found you,” it’s hard to tell whether she’s singing about a man or the fame she’s so tirelessly pursued and then dismissed in the past few months.

9. “Carmen” — “Carmen, Carmen, stayin’ up til mornin’ / Only seventeen but she walks the streets so mean.” This cautionary tale is littered with Coney Island references, but is ultimately a poor-man’s version of far-superior (and hookier) anthems like “Roxanne.”

10. “Million Dollar Man” — Intrigue, danger and clichés (“One for the money / two for the show”), this song doesn’t accomplish anything that better tracks before it pull off better.

11. “Summertime Sadness” — The pouty title alone drew giggles at Del Rey’s Bowery gig, but the song itself proves to be one of the more durable tracks here even if its lyrics start to get redundant (“baby you da best…kiss me hard before you go.”)

12. “This Is What Makes Us Girls” — What becomes a girl, in Del Rey’s terms? “Drinking in a small town firelight / Pabst Blue Ribbon on ice,” for starters, a line that’s sure to gain both nods of recognition and groans of overkill by her hipster fan base. The hard-edged production here saves what would otherwise come off as a Betty Boop ballad.

13. “Without You” — Most notable for its opening line, which is also quoted in her Twitter profile (“Everything I want I have / Money notoriety and Rivieras), “Without You” doesn’t ultimately say or accomplish anything that hasn’t been said on at least five other tracks by this point.

14. “Lolita” — Another song that’s made the demo rounds, this is perhaps the most annoying track on the record, if for no other reason than she feels the need to spell out the word “dark” in the chorus. Repeatedly.

15. “Lucky Ones” — A final motorcycle ride into the sunset for Del Rey and her troubled beau, “Lucky Ones” wants to be a slow jam worthy of Mazzy Star or Urge Overkill. But since Del Rey’s no Hope Sandoval just yet, the listener has to settle for some of Del Rey’s more pleasant vocals and tried-and-true wordplay (“I tried so hard to act like a nice lady / You taught me that it was good to be crazy”).