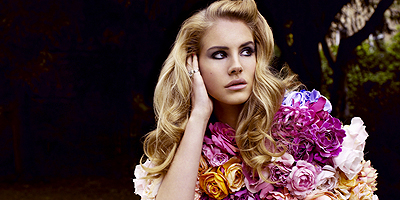 Video Games was voted the song of the year by The  Guardian‘s critics. You can read what they said about Lana’s single below.

First, the case for the prosecution. It would be nice if Lana Del Rey really was the mysterious polymath auteur she briefly appeared to be when the vaguely Adam Curtis-like clip for Video Games started doing the rounds on the internet, rather than a female singer who’s worked – like Adele, Duffy, Florence Welch and Katie Melua – with blue-chip songwriters-for-hire Eg White and Guy Chambers. It would be nice if the record company biog that called her “a recent resident of a New Jersey trailer park recently emerged from smalltown USA” didn’t feel at least slightly duplicitous given she’s actually Lizzy Grant, the daughter of a multi-millionaire estate agent and internet domain magnate – “Hypnotic New Album From Domainer’s Daughter Lana Del Ray Now Available!” offered Domain Name Journal’s headline on the release of the 2010 debut album her management has gone out of the way to suppress – and the small town was Lake Placid, ski resort, tourist spot and self-styled “playground of North America”. And it would be nice if the image overhaul she underwent – including the name change, never mind rumours about the size of her lips – hadn’t provoked the kind of prose you find on MTV’s Style Blog: “ZOMG she is so important … the self-proclaimed “gangster Nancy Sinatra’ embodies the best of strong, sculpted eyebrows, bump-its and hairsprayed tonsorial PERFECTION.”


Now the case for the defence: none of that matters. For one thing, you could argue it’s the prerogative, perhaps even the duty, of pop stars to reinvent themselves in interesting and fabulous ways: what is pop if not a theatre of dreams in which David Jones from Brixton can reimagine himself as a gay alien, Bob Dylan can spin ridiculous yarns about his uneventful, middle-class childhood and – a personal favourite – a diminutive Italian-American called Ronald can become Ronnie James Dio and slay a dragon onstage every night? Authenticity is for the Antiques Roadshow, not pop music: if you’re that concerned with authenticity, you might consider avoiding pop and rock and sticking with field recordings and Topic’s Voice of the People series.

And for another, it’s hard not to feel that if Lizzy Grant had had a song as good as Video Games on her debut album, she would have attracted substantially wider attention than the pages of Domain Name Journal and the Adirondack Daily Enterprise (“a girl from an upstate New York town who may be on the verge of something great!”). She might not have needed the makeover at all. Regardless of who made it, where they came from, who their dad is, what they’re called and whether or not their lips have been subject to the ministrations of a surgeon, Video Games would be a magnificent song. There’s something imperishable and undeniable about its sighing melody, the way it rises and falls with the mood of a lyric that can’t seem to decide whether the bloke it’s about is the best thing since sliced bread or a unbelievable pain in the arse. You can see why Video Games united the guy who writes Pitchfork’s Track of the Day column with whoever picks the Radio 2 playlist, why it doesn’t seem to have lost any of its haunting power in the face of ubiquity. And if one of the marks of a great song is how it can withstand radical reinterpretation, you could point to the variety of fanatstic remixes of Video Games, which in the hands of Balam Acab, reinvented the song as hallucinogenic ambience, and via Joy Orbison as strange, beguiling, disjointed house music.

It’s tempting to say with a song that good it doesn’t matter who sings it, but that’s not strictly true. As pop divas who collaborate with Eg White go,Lana Del Rey sounds hugely understated. Her voice has a lot in common with Mazzy Star’s Hope Sandoval – not exactly a touchstone for many artists who’ve made the top 10 in 2011 – which fits the song perfectly, chafing against the orchestral bombast, the harps and pizzicato strings in the background: this is a song about big emotions brought on by everyday events, an indolent boyfriend opening a beer, a visit to a bar, putting on perfume. It would sound terrible if, say, a contestant off The X Factor did that awful thing Louis Walsh persists in referring to as “making the song your own”: it wouldn’t work if it was decorated with a load of showy look-at-me melismatics.

The future for Lana Del Rey feels a little uncertain. She went from mysterious internet phenomenon to the Q awards at such speed you suspect even the shadowy management that suppressed her first album and got her to change her name are a bit taken aback. You might feel more confident about her ability to deliver an album that lives up to the mammoth expectations and confounds her critics if she actually were the mysterious polymath auteur she briefly appeared to be. That said, being an arch, artfully constructed figure certainly doesn’t preclude making great albums and she’s already made one extraordinary record, which is one more than most people make. Whether Video Games turns out to be the one truly remarkable thing about her, or a portent of greatness to come is a moot point. But, like the criticisms levelled against her it doesn’t seem to matter, at least while the song is playing.