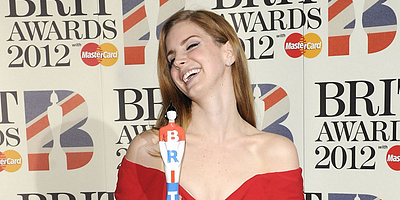 Lana Del Rey was given the Best International Breakthrough Artist trophy at the BRIT Awards and says that while her album may have divided critical opinion, the honour has given her a huge boost.

“I personally appreciate the award,” she told Xfm. “I never intended things to be difficult or controversial, because by nature that’s not who I am. I wanted an easy career where I could tour Europe and make beautiful music! I just have the support from other musicians tonight and that means a lot to me.”

Meanwhile, Ms Del Rey also revealed that she was looking at playing some UK dates very soon. “It’s not going to be a real proper tour, but I’d like to maybe hold residency a few nights in a month at a certain place. It’ll probably be in late May.”