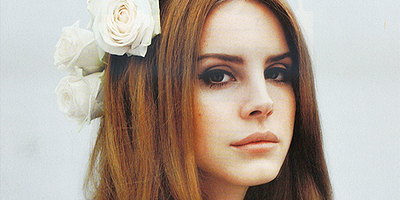 Lana Del Rey gave one interview for Telegraph.co.uk, you can read it below.

Lana Del Rey is the girl of the moment. On a freezing New York afternoon, wind-chill factor -8C, she breezes into the lobby of an exclusive members’ club with the untouchable aura of someone transported within their own micro-climate. She looks immaculate, as indeed she has always looked since the world first sat up and took notice – perfectly turned out in tight blue slacks, green shirt and a suede jacket, like a beatnik princess. Long auburn hair falls in perfect lines around her face, deep brown eyes casting a frank, steady gaze beneath long, false lashes.
In the flesh she still has a girlish slightness of frame, but in front of cameras she is capable of shifting swiftly from a kind of coltish innocence to vampish knowingness. It’s a quality that is hard to pin down but is present in the videos, songs and photo shoots that have suddenly and dramatically elevated her from the obscure margins of the internet to the centre of the pop zeitgeist, a kind of doubleness, a sense of duality and merging contradictions. She is a person into whom you can read a lot.
Which is what the world has been doing. In May 2010, the unsigned Del Rey posted a home-made video on YouTube of a deceptively simple song called Video Games, in which she sang in a low, sultry voice about a remembered moment of idle and possibly idyllic love to an achingly sad melody, set to found footage of old Hollywood and sun-bleached shots of Del Rey. It’s a clip that has a strange, otherworldly power, emphasised, perhaps, by the absence of beats, the quiet poise of its artful construction, allied to intense yet understated emotion.