Show in Tokyo was cancelled!
07
Filed in: News 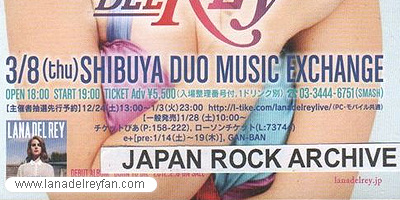 The scheduled concert of Lana Del Rey in Tokyo got cancelled. Below you can read the note that was published on Smash-JP.com.

Due to unprecedented international demand we have had to reschedule her plans and consequently have to cancel Lana Del Rey’s show in Tokyo. New plans to perform for her Japanese fans are being discussed and will be announced shortly but all tickets will be refunded for the upcoming Tokyo show and we apologize for any inconvenience caused.