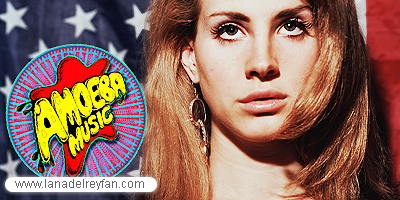 IdolatorDotCom published a review of yesterday’s show of Lana Del Rey at the Amoeba Music Store, in Los Angeles, USA.  You can read it all below:

Two hours before she took the stage in front of a fawning capacity crowd at Amoeba Records in Los Angeles Tuesday night (Feb. 7), reports confirmed that Lana Del Rey had in fact canceled her performance at Austin’s South by Southwest Music Festival in March and postponed several more dates in Australia. It was the inevitable turn in the news cycle of such a polarizing singer, who at once attracts a blocks-long line of fans for an intimate in-store appearance and an avalanche of vitriol from critics. Earlier in the day, rumors that management had withdrawn plans for a 30-date tour following Del Rey’s now infamous Saturday Night Live incident were denied by her PR team, but the situation only highlighted the fact that faith in the former indie “It” girl is waning.

Lana Del Rey was acutely aware of all this as she stepped on stage last night. Clad in blue jeans, white shirt, her hair curled in that bouncy ’40s Hollywood style she’s known to wear, the singer took the mic to an uproar of cheers. “I only sing for you,” she told us.

Visibly overwhelmed by the turnout — with audience members packed tightly into Amoeba’s every nook and cranny, sometimes spilling out of the mezzanine — Lana began with “Born To Die”, accompanied by piano and guitar. Though she smiled and giggled and waved during the songs, her voice at times sounded as if on the verge of tears, more a sign of being moved than a symptom of self-doubt. Less stoic in her stage presence than seen in some of her TV spots, LDR came across as girly and grateful but still uncomfortable and unsure of what to do with her hands most of the time. As in that song’s video, the singer pantomimed smoking a jay at the call to “go get high” and (this is not in the video) restored one portion of chorus to its R-rated origin: “F*** me hard in the pouring rain”.

“Blue Jeans” followed, a more pulled together version than what America saw on SNL, but with Lana still taking those long, moaning runs that tend to muddy the tune’s snappier phrases. 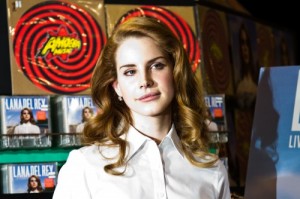 Between verses, you could hear the swarm of camera shutters firing from the press pit below the stage. Between songs, fans shouted song requests and marriage proposals. Giving in to the pressure, Lana took off, unaccompanied, into the first few seconds of “Summertime Sadness,” cooing, “I just wanted you to know / that baby, you’re the best.”

During a slowed-down “Million Dollar Man”, Del Rey would occasionally grip the microphone as if she were about to whisper it a secret, then launch into a dramatic vocal run where she would toy with her higher registers. It was the same maneuver that backfired on SNL, but here in front of her supporters it was a comeuppance, LDR’s way of proving that yes, she can wield the power of her own voice.

She was strongest on the well-worn “Video Games”, but how much of a surprise is that? She’s been performing it live internationally for five months now. She sang it faithful to the recording, with a smile on her face, looking out at the people who waited four hours, mouthing the anthem right along with her. Those who came to see her just for this song were paid in kind.

And then it was almost time to go, or at least to move on to the meet-and-greet and album signing. “Thanks for everything, and you know what I mean,” Del Rey told the crowd. And they did. They knew that maybe, but not probably, this would be the last opportunity they had to hear her play live, and gosh, was she happy to finally have somebody on her side.

“China Doll” was how Del Rey chose to end the night. In the context of the album, the song is about a girl who has everything but the love of her life. In the context of Lana Del Rey’s performance at Amoeba Records in L.A. on the same day news broke that her tour was canceled before it began, in the same week the press quoted her saying her first album would be her last, the song was about a singer who climbed to fame leaning hard on the crutch of her public. “I am nothing without you,” she sang.