My report: Meeting Lana in Berlin!
15
Filed in: Other

Yesterday (July 14th) was THE day. The whole week I prepared my meeting with Lana (I just hoped I would meet her). I asked many people if they have any information which flight Lana is going to take from London to Berlin but no one had an idea. So I just thought, I don’t care, I will wake up in the morning and wait at Tegel airport until she comes. My friend and I stood up early to catch the first flight from Heathrow airport (10am) but Lana wasn’t in it. I spent my whole day waiting at the London flight gates (two flights at 11am, one at 1pm) but there was no Lana and no Byron and I got really disappointed and frustrated. But I knew that she had to come this day because the Melt! festival started the next day. The fifth flight would arrive at half past six, between this time my friend and I crused through the city. At around 5pm we arrived back at Tegel airport and I checked our twitter account (I had to search for wireless internet the whole time because I hadn’t some on my phone -.-). I couldn’t believe what I saw!

1gleeks, our team member and my rescuer, sent me a picture a fan has taken with Lana at around 4pm at GATWICK airport that had to mean that Lana will arrive at Schönefeld airport not Tegel! I couldn’t breathe and I was about to cry because I didn’t know if I could reach Schönefeld (SF) in time. I called my brother and he told me that the plane will arrive at 7.18pm because it was delayed so I ran to the bus with my friends which drove us to the train station. It took us about a hour to get to the airport and I got really excited. We arrived at 6.50pm and waited at terminal A for Lana. We had a big poster of her in our hands and then suddenly Byron came and was screaming the hell out of me and he said “Hey girls, how are you, Lana is coming..”. And then FINALLY, after maybe 10 hours of waiting, she came and I was screaming “LANA, LANA, LANA, welcome!” First she didn’t know where to look at but then she saw us and she hugged us and I couldn’t speak anymore, I just said “Hi, I’m waiting since 10am for you” and she said “Ohh, what really? How did you know I’m coming?”. She was SO sweet and SO beautiful and cute and excited like us. And there was NO ONE else who waited at the terminal for her, no other fans who recognized her, no paparazzi. In person, Lana looked even more gorgeous, maybe a bit thinner and shorter, haha.^^ She was wearing a blue pullover and a white skirt and I saw her tattos and we spoke about the new one on her arm. Then I said “I’m the webmiss of lanadelreyfan.com and we are supporting you since November, do you know the site?” and she replied “Is that you?, I know the site, I love it, thank you so much” (another hug). She was so happy about it. Then I gave her a little paper where I wrote down each member of our team, our twitter names and my phone number (haha). She said “Oh, thank you, how cute” and she was smiling the whole time and I talked and asked so much, I was shaking but she listened very carefully and Byron and her male friend waited patiently next to us. Lana took a picture with us and I asked her for a video message (see below). Then she signed my russian Interview magazine, my Born To Die album and the poster (Nicole Nodland picture). My friends gave her little presents and she thanked us a lot for the support and just everything. I asked many things (while I was shaking and talked in my german accent english with my dry mouth) but here are some that could be important:

– Summertime Sadness should have been released today, but it didn’t happen yet, so maybe tomorrow?
– According to Lana, she had “big plans” for Brazil and Russia and planned concerts in many cities of Germany like Hamburg but she is still not sure about it
– She is going to do a big America tour, maybe in October (?)
– She didn’t say directly that the summer mixtape is going to be released but she wrote 8 new songs for it (I told her which I already knew and she said: “Oh, you know so much!” and I answered: “Of course, I’m leading a fansite!”)

I also told her that our fansite is going to have a new, more professional layout with the picture of Vogue Japan and the pink feathers and she said “Oh, I really like this picture, I will visit it!” We were talking for about 20-25 min and I told her very often how much I love her, she got a lot of compliments and in the end she gave me a kiss and hugged me goodbye and said “Thank you so much girls” before she left with her friend and Byron. (I also took a picture with Byron.) To sum this up: THE BEST DAY OF MY LIFE, it was better then I even imagined and Lana is the nicest person in the world! I saw many candids videos in the last 6 months but to feel her love in reality was just unbelievable. Thank you Lana! 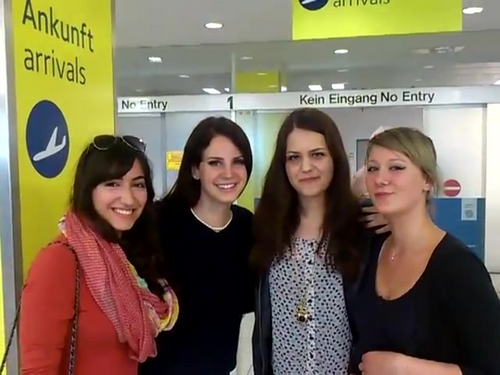 (Please don’t share the picture anywhere else, I look so weird)
You may also like to read