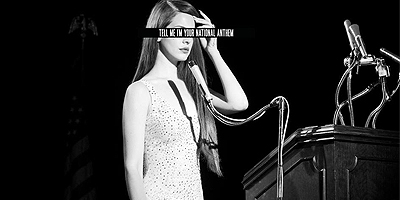 After performances at, for example, London’s Lovebox Festival, the BBC Hackney Weekender, Isle of Wight Festival and Latitude Festival, Lana is next due to appear live at several other countries such as Norway, Portugal, and others.

«National Anthem» will come with a diverse and exciting remix package including Tensnake, Todd Terry, Afterlife and DC Breaks. This single is being released on Polydor Records and will be available on digital download and 7” picture disc, also available is a digital remix EP.

Click on the following links and listen to all the «National Anthem» remixes:

Thanks to  House Of 27 (exclusively adapted by lanadelreyfandotcom).