Lana Del Rey covers California Style: “I really like the idea that life imitates art and I’ve noticed that in my own work”
14
Filed in: Interview Lust For Life News Photos

Lana Del Rey is on the cover of California Style magazine for their March issue. She spoke to Lesley McKenzie about living in LA and finding friends and inspiration there, as well as how she’s over her obsession with old cars such as the 1950s pickup. Lana also talks about being in a happy place, following her dreams and how she warms up for her shows with rehearsals and meditation.

The interview is accompanied by a gorgeous photoshoot photographed by Victor Demarchelier and styled by Alison Edmond. Below you can find some snippets from the interview!

California has been a source of inspiration for Del Rey in the last few years, often from behind the wheel of her truck (“It’s brand-new, it’s not a nostalgic, 1950s pickup,” she quips. “I’m over my old-car obsession—I’m happy with Bluetooth”), driving along the Pacific Coast Highway. The tony San Ysidro Ranch in Montecito, which was devastated in the winter mudslides, was always a favorite destination for Del Rey to recharge.

“I’d say the last two years have been relatively peaceful,” says Del Rey of her current frame of mind, which has since seeped into her work. “I think that’s kind of why my newer record has a little bit of a brighter tone to it, whereas before I was definitely working a lot and on the road 24/7,” she says. “I’m still traveling a lot but I had a lot more to work through a couple years ago, I guess.”

That shift in perspective shines through on ballads such as “Change,” the last song Del Rey wrote for the album, which addresses the fact that she was seeking change in her life but didn’t know how to go about it. “It was just more like a small bubbling of wanting to turn things around aesthetically in my art and personally as well. I really like the idea that life imitates art and I’ve noticed that in my own work. I knew that good things could follow if I put it out there that I was still trying to grow.”

Click here to read the full interview over at C Magazine. The issue will be out on February 20. 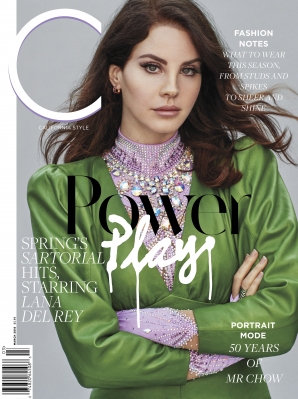