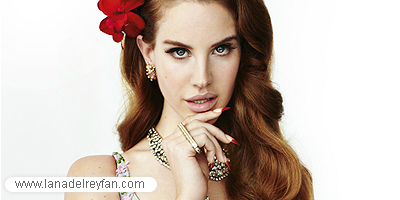 Lana Del Rey gave an interview for GraziaDaily.co.uk where she talks about her beauty secrets. You are able to read it below.

Backstage at the Mulberry show today, Grazia Daily meets Lana Del Rey; without a doubt one of the most intriguing celebrities currently in the public eye. With that penetrating “Video Games” stare, the straight-out-of-a-fashion-shoot glamour and those sophisticated-beyond-her-years  melancholy vocal stylings, Del Rey appears aloof and terrifyingly in control, so it’s a surprise to find she is barely average height, fairly shy, and seemingly super-young, almost like a teenager (she’s actually 25).

In person, she looks an awful lot like a young Julia Roberts in that she looks like a Disney fawn; with that beigey hair, and delicate Bambi-esque prettiness, helped by a freckled, upturned nose and enormous false lashes that Del Rey claims took ‘a while’ to apply.

In fact it took her an hour and a half to get ready for the front row; ‘to set my hair (I used to use heated rollers but now I use a curling iron)… put on tinted moisturizer… my eyeliner…the false lashes…it takes a minute to become myself.’ Del Rey doesn’t exactly mime inverted commas around the word “myself”, but she makes it clear that the transformation from plain old Elizabeth Grant into her alter-ego Lana Del Rey is something of a costume change.

So who knew that Lana del Rey has been living right here in London ‘off and on for the last two years…I did a third of the record here, my managers are here and I love my managers. My producers are mostly here; I found a really talented dark group of people. For this record they had to be in touch with their darker side!’

Today, though, Lana is ‘very happy’ and no wonder: ‘I’m staying here, upstairs [at Claridges]’. Lana is also happy because she has had a Mulberry bag named after her; the “Del Rey”, a flap-over, rather ladylike semi-structured tote. ‘I’m just very honoured’ she says of her namesake accessory; ‘I was talking to [Mulberry Creative Director] Emma [Hill]… and she had started listening to [my record] six months ago and she really loved it, just for herself. And I think we related to each other because I try and keep a lot of integrity and I don’t compromise lyrically or sonically, and I think she feels the same way when she’s designing, so hoped we could do something together.’

So Lana arrived, the star guest, on the front row of the hottest London Fashion Week show, clutching her very own bag; in white ostrich skin with gold fastenings. ‘[Emma] knew that I really only wear white and gold on the stage, and I kind of like all things exotic, so here’s my white ostrich bag…and then you might have seen a couple [more] bags on the runway? So yes, it’s really special’.

And why white and gold for her stage outfits? ‘it just reminds me of summertime’ she says, dreamily ‘I always like performing outside…like, by the water, so…white and gold is just always a good look for that’, she giggles, self-consciously.

This is Lana’s first London Fashion Week show, although she has attended shows in New York. ‘I was lucky enough to sit next to [singer] Azealia Banks and Pixie Geldof, so…’ Lana starts laughing ‘…we had fun. Not too hard to have a good time at this show.’

Not for Ms Del Rey a tiny dress and towering heels for the front row. Today she’s wearing an outfit which is pretty much Winehouse-tomboy. Brand loyal, Lana is wearing a Mulberry baseball jacket – grey with white leather sleeves – which she declares ‘perfect’ (and it really is). Underneath there’s a buttoned-to-the-neck crisp white cotton shirt, ‘Brooks Brothers… I have every one of their shirts,’ It’s soo fitted! I say, astonished at the shirt’s [and Lana’s] tiny sculpted waist-line ‘It’s a [size] 2! A women’s 2… which is bigger than a regular 2.’ And skinny, low-waist jeans with blingy, large diamante detailing around the pockets, which seem incongruously mall-rat; ‘I don’t where these are from.. I stole them from my sister’.

She’s also wearing beige ostrich skin ballet pumps with a fat gold chain around the back of the heel; ‘they’re Rachel Zoe’s new pumps’. Flats? Somehow this doesn’t fit with Lana’s her 1950s movie star glamour. We’ve all seen her teetering around in that Saturday Night Live performance. Do you often wear flats? ‘Yeah, always! I get dizzy in heels’. But all those photo-shoots? We always see you in sky-scraper heels! ‘I know! And then I’m air-lifted straight out of them!’

So how would you describe your style? ‘I’ve been thinking lately about French influences and hip-hop influences for my record, so I’m going to say “ghetto Monégasque”’ [from Monaco].

She’s a funny one. Ask Lana to name her favourite British style icon and she chooses, not Kates Moss or Middleton, or Alexa or even, say, Elizabeth Taylor but ‘Mark Ronson’. Eh? ‘I like Mark Ronson… he knows I like his style’. When pushed, she says ‘Keira Knightley… is beautiful.’

Of course, what Keira and Lana have in common are those incredible, pillowy pouty lips. For most of us, there’s no hope of achieving those bee-stung beauties without some major injections, but we can at least try out her lip-colour of choice. Del Rey reveals ‘My friend Pam had a lot of YSL lipsticks so I started buying those because the casings are so pretty and the colours are really beautiful, so I started buying a lot of make up from that line.’ YSL you just hit the jackpot (although, let’s face it, Del Rey could take her pick of cosmetics modeling contracts right now). So what’s the current Lana lip colour of choice? ‘I think it’s a shade called “Blonde Ingenue”.’ How perfect.

Lana’s other beauty signature is those terrifying nails; ‘I have to redo them’ she says scrutinising her tattoo-sprinkled hands. There’s barely a chip on the two-inch pointy talons, which today are painted metallic red like a 1950s Corvette, with a delicate, barely-there line of gold at the cuticles, which may or may not be from a previous manicure. London Fashion Week’s make up artists have already begun trying to emulate the vampy Del Rey nails this week, but Lana says ‘I’ve had them since I was 17.’ Quite a look for a teenager. ‘Oh yeah, these are extreme’ she grins, ‘…as I tend to take things.’