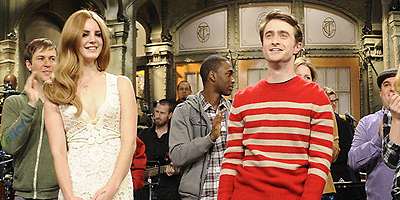 TMZ.com  published one article about Daniel Radcliffe defending Lana’s performace on SNL. You can read it below:

Daniel Radcliffe is coming to the defense of the singer he introduced on “Saturday Night Live” this weekend … sorta.

Radcliffe was at the Bafta nominations … when he was asked about Lana Del Rey — who’s been TRASHED by music critics and people with ears alike who suffered through her baffling performance on the show (below).

Radcliffe responded, “It was unfortunate that people seemed to turn on her so quickly.”

He added, “I also think people are making it about things other than the performance. If you read what people are saying about her online, it’s all about her past and her family and stuff that’s nobody else’s business.”

Radcliffe concluded, “I don’t think it warranted anywhere near that reaction.“