On December 4, Lana Del Rey attended Variety’s 5th Annual Hitmakers Brunch, presented by Peacock and Girls5eva, held at City Market Social House in Los Angeles. Her received the Decade Award which was presented by her ‘Wildflower Wildfire’ collaborator Mike Dean. In attendance were also Lana’s managers, Ben Mawson and Ed Millett. Not to mention, Lana was photographed with Avril Lavigne.

International Business Times wrote up the highlights of Lana’s speech.

In her acceptance speech, the “Summertime Sadness” hitmaker said she was grateful for not only the acknowledgment of her work but also “all the criticism,” admitting, “I get a lot.”

“What’s good about it is I really believe what’s reflected back to you is in some way a mirror to what’s going on in your inner life,” she said. “It’s given me a huge opportunity to look inward and to look at my family of origin and look at my lineage, see what’s going on up there.”

Del Rey also paid sweet tribute to her grandmother, saying, “Any of the lightness and funniness and goodness in me I pretty much specifically got from her.”

Furthermore, she stressed how one’s passion could lead to excellence. Del Rey said that she has been lucky to have followed her “muse” for 18 years, which she said has taken her away from music at times and into “other mediums and other job opportunities that have nothing to do with the arts at all.”

“I’m very flexible and what I’ve come to understand is that if you follow what you’re interested in, you’ll end up being the most creative in that field,” she added.

Del Rey went on to give the audience a piece of advice, which was to “do what feels right” no matter what one’s job is. “I always like to say that the way I live my life is my poetry, my lovemaking is my legacy, and I get to make music in between,” she continued.

She also gave a special shoutout to her managers Ben Mawson and Ed Millett, who have been with her throughout her journey as an artist.

“I’m super grateful for them, Ben and Ed, and for this award. I’m really glad that they’re here with me. They picked me out of the bar scenes, lounge singer scenes that I was singing in for about eight years before I met them,” Del Rey said.

Disenchanted with American media and publications, Lana Del Rey continues to appear in magazines outside of the US. Lana covered Rolling Stone France in March and Vanity Fair France in April. 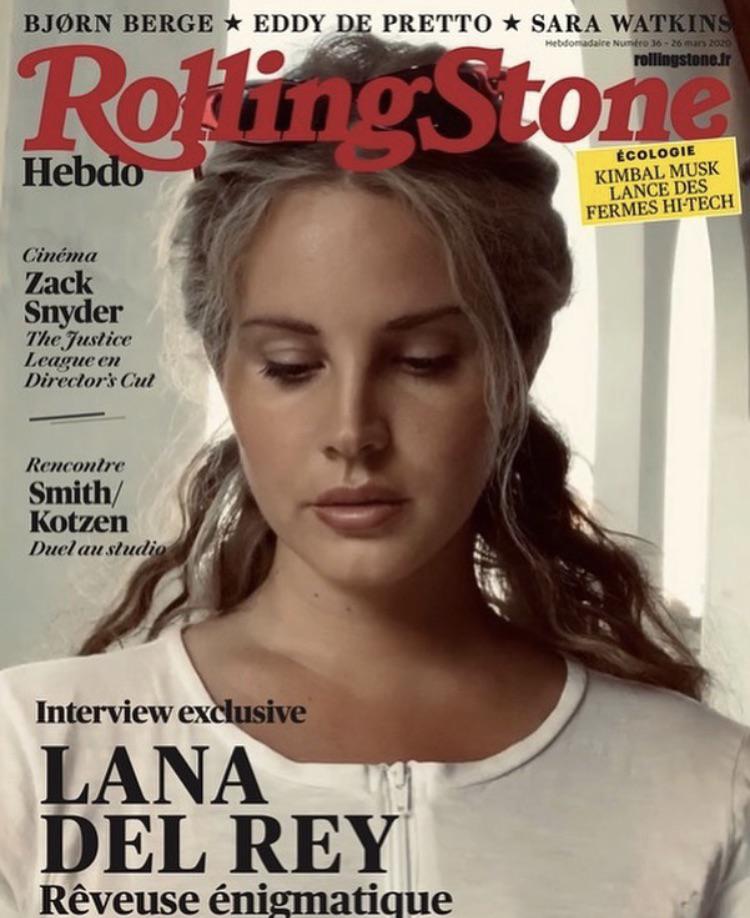 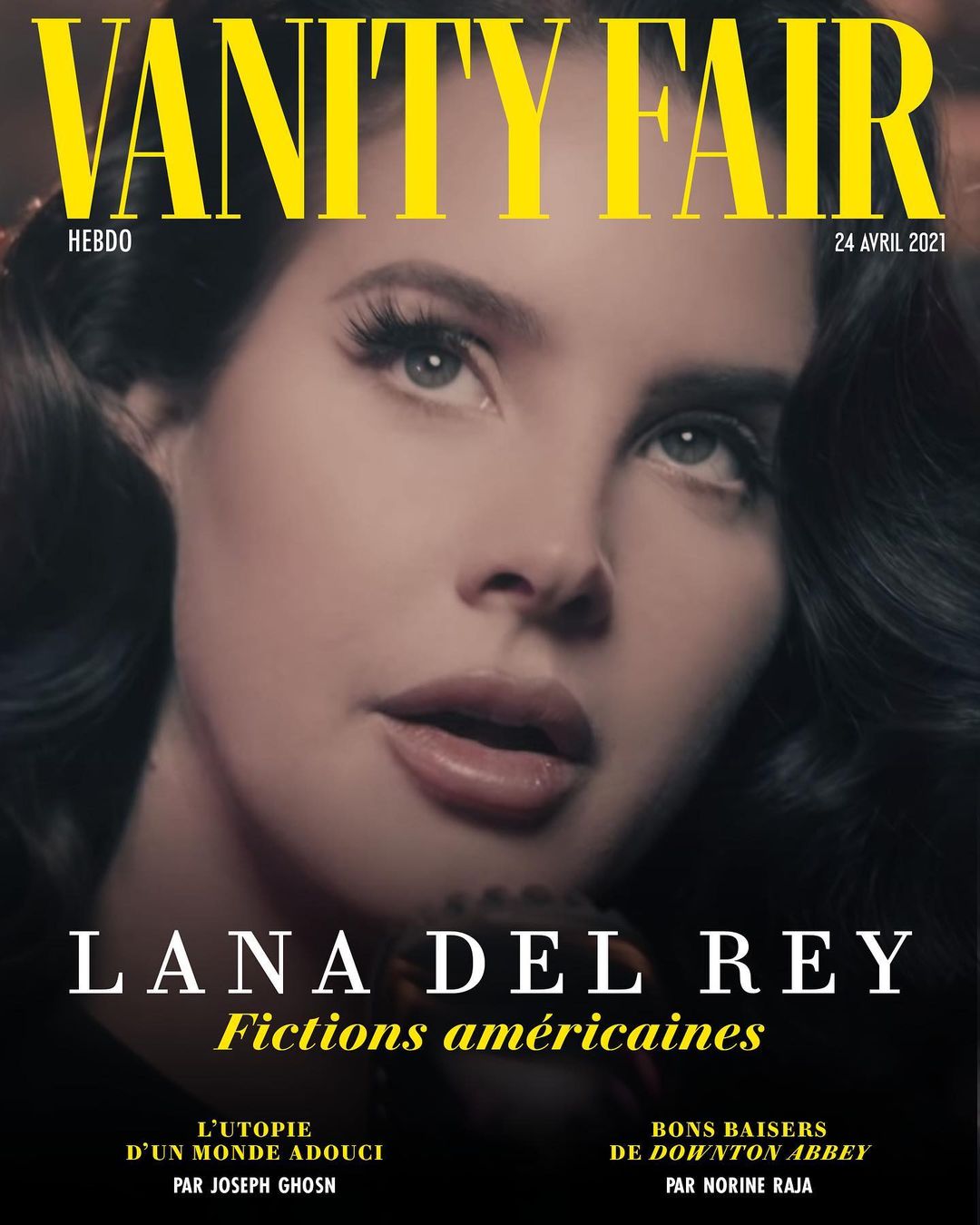 Lana Del Rey has been spotted out in March and April promoting her album ‘Chemtrails Over the Country Club,’ as well as hanging out with some friends, and joining Nikki Lane on some of her shows in Texas.

Lana Del Rey is on the cover of Rolling Stone Germany’s April cover. In the interview, Lana reveals that she has written an 11 minute poem titled “My Father Told Me If I Went Slowly, I’d Be Safe – But He Was Wrong.” The magazine is available to buy here. Below is a roughly translated snippet from the interview, which is originally in German.

What is a common misconception about you? That I feel attacked for no reason.

What happens to the American Dream when it comes true? For me that means: you know who you are and move accordingly in the world. In my case, a mixture of satisfaction and activism. I fill my own cup, but I also have a lot of people who I support and whom I like to watch grow.

What are you not getting enough recognition for? In my public life, recognition is not particularly important to me. In the bedroom, on the other hand, I like to work hard to collect extra points.

What instructions did you give your producer Jack Antonoff particularly often? “Let yourself go!” “Be wilder!” “More twists at the end of the songs!” And whenever I got stuck, I asked him about chord progressions I could sing on.

What do you like best about Los Angeles? What I love about L.A., of course, is the weather – today, at the end of February, it’s 28 degrees – and the hiking. I love the surrounding area and the many animals.

Lana Del Rey covers Music Week: “[It took years] to be understood as a person telling a story rather than a trend”
17
Arquivado em: Interview News Photos

Lana Del Rey is on the April cover of UK magazine Music Week, which is out from March 16. Part of the interview can be read on their website, but the rest is only available to subscribers. The photoshoot appears to be outtakes by Lana’s 2019 shoot for Q Magazine by Cody Osbourne, with one photo of Lana from 2018 taken by Chuck Grant.

Part of the discussion, of course, includes reuniting with super-producer Jack Antonoff, with Lana detailing how one of Chemtrails’ finest moments, White Dress, came about as a surprise when she heard him “noodling” around on the piano.

“I just stepped up to the microphone and started ad-libbing an entire song, which was only somewhat modified with layered vocals,” she recalls. “That only happens once in a while, and it also started off as kind of a joke [with] me not really knowing what I was saying or singing about. It just brings me back to that good ol’ fashioned feeling of getting lucky and being able to express myself without really having a second thought about needing to edit it. That’s what the sentiment is about, being brought back to a time when things felt the purest.”

“Jack’s technical skill is off the charts musically, his chords are fantastic if you’re ever stuck for inspiration,” she continued. “On top of everything, he’s just genuinely hilarious which is really important. We have each other laughing a lot.”

Also in the feature, Lana Del Rey, Tap Music’s Ben Mawson and Ed Millett and Polydor co-president Tom March look back at her career to date.

“Coming off Norman Fucking Rockwell!, she’s in the best place she’s been in almost from the beginning of her career,” Polydor’s Tom March told Music Week. It is a position, Lana stresses, that has been hard won.

“I know for myself [at the beginning of my career] it took years of walking into the same [kind of] labels I’m signed to now to have a chance to be understood as a person telling a story rather than a trend,” said Lana. “I fought very hard for that and I’m so glad I did. People may get caught up now and then in the fact that I have a strong look or presentation, but at the end of the day what’s important to me is the fact that I’ve been able to tell my life’s stories, dreams and encounters for over a decade, and that in itself is a triumph.”

“We don’t count on hits,” said Ben Mawson. “Whilst being a superstar, she’s not conforming to anything in terms of modern pop. She wasn’t even when she first came out. Video Games didn’t have any drums and it was a big global hit when, at the time, everything was – and still is – dominated by beats. She’s done her own sweet thing musically since the start and it connects.”

“It’s not that I don’t want to have a hit, it’s just that without meaning to, my journey has ended up playing out more like a long-term game,” Lana told Music Week, before outlining the things that have worked for her. “Long-playing records and lots of them! [With] spoken records in-between, and lots of other little interesting projects. I think an artist can have their finger on the pulse of culture without having big hits, but it might end up being something that isn’t metabolised in the form it was meant to be until a later time. At least that’s how I feel like it is for me mostly.” 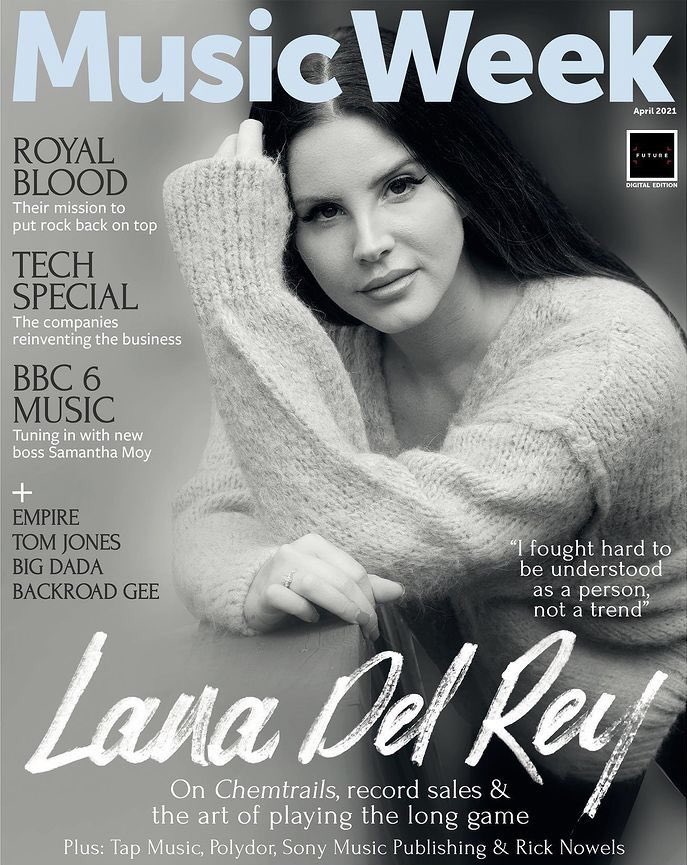 Lana Del Rey is on the April cover of Mojo, a music magazine in the UK, which can be purchased from their website here. Alternatively, you can read the scans in our gallery if you are outside of the UK.

Lana Del Rey was spotted out and about during January through March. She was spotted by fans who she took photos with, and she also spent some time in Alaska with her new boyfriend, Clayton Johnson.

Candids > 2021 > With some fans while dining out at Moose’s Tooth Pub & Pizzeria in Anchorage, Alaska, USA (February 16)
x—1 picture was added —x

Candids > 2021 > With some fans while dining out at Moose’s Tooth Pub & Pizzeria in Anchorage, Alaska, USA (February 19)
x—6 pictures were added —x

Lana Del Rey was spotted out and about during the months of October through January, which have been added to the gallery. She was spotted out running errands, grabbing food, hanging out with friends, sighted by fans, and more. Lana even performed a surprise duet with Nikki Lane at her concert on October 18, 2020. They sang a song called ‘Breaking Up Slowly’ from Lana’s upcoming album. Check out a video here!