The Oscars of Science

Lana Del Rey attended the 2018 LACMA Art + Film Gala at LACMA which honoured Catherine Opie and Guillermo del Toro. The event was presented by Gucci and took place on November 3.

Lana Del Rey is the new face of Gucci! She will be joining Jared Leto on the new campaign for the Gucci ‘Forever Guilty’ perfume, which will be out worldwide in January 2019. A party was thrown in celebration of the pair and creative director Alessandro Michele at Hollywood Forever Cemetery on November 2; a place Michele has drawn inspiration from countless times.

Courtney Love was also in attendance and she delivered a behind the scenes look on the guccibeauty Instagram account (watch here). Lana and Jared both wore Gucci designed by Michele to the 2018 Met Gala.

Introducing @lanadelrey as the new face of #ForeverGuilty, captured with @jaredleto who returns to star in the campaign for the Gucci Guilty fragrances. Celebrating the scents at a party in the Hollywood Forever Cemetery, Los Angeles #LanaDelRey wore a custom #gucci lurex dress with asymmetric pleated sleeves and skirt by #AlessandroMichele, and #JaredLeto wore a striped jacket and pants from #GucciCruise19. The new campaign directed by @_glen_luchford will launch in January. #GucciBeauty Watch scenes from the party captured by @courtneylove on @guccibeauty’s highlights.

Lana Del Rey made a special appearance today at the Apple Event which unveiled new models of the iPad Pro, MacBook Air and Mac Mini. She was introduced by CEO Tim Cook where she gave a surprise performance of upcoming song ‘How to Disappear‘, followed by ‘Venice Bitch’.

Having been instructed not to swear, Lana said she was unable to name her new record (‘Norman Fucking Rockwell’) and only referred to ‘Venice Bitch’ as ‘Venice’. Jack Antonoff accompanied Lana by playing the piano alongside her on stage. The event was held at the BAM Howard Gilman Opera House in Brooklyn, New York.

You can watch Lana’s performance below and see a short video of her introduction here.

Thank you @LanaDelRey and everyone who helped make today’s #AppleEvent unforgettable. We’re excited to see what people around the world create with the new iPad Pro, MacBook Air and Mac mini! pic.twitter.com/bELvK5VvlJ

Lana Del Rey attended the Costume Institute Gala at the Metropolitian Museum on May 7. The theme this year was ‘Heavenly Bodies: Fashion & The Catholic Imagination’.

Lana wore a custom-made Gucci dress and was in attendance with her two Gucci angels: Jared Leto and designer Alessandro Michele. Michele – being the creative director of Gucci – designed the outfits for three of them. Read more about Lana’s look below, and click here to see the details close-up.

The long sleeve silk cady and lace grown was inspired by Our Lady of Sorrows by Alessandro Michele. The bodice features ‘The Seven Sorrows of Mary‘ with the initials LDR on the sacred heart. The skirt features hand stitched hold metal and coloured silk thread embroidery inspired by baroque floral motifs and daggers, with a pleated tulle and lace underskirt.

Moments before the #MetGala, Gucci Creative Director #AlessandroMichele together with @lanadelrey and @jaredleto in custom #Gucci. #MetHeavenlyBodies

Heading to the Costume Institute Gala at the Metropolitan Museum of Art—the #MetGala— celebrating the opening of the exhibit ‘Heavenly Bodies: Fashion and the Catholic Imagination.’ @lanadelrey wore a custom #Gucci long sleeve silk cady and lace gown inspired by Our Lady of Sorrows by #AlessandroMichele. The bodice features ‘The Seven Sorrows of Mary’ with the initials ‘LDR’ on the sacred heart. The skirt features hand stitched gold metal and colored silk thread embroidery inspired by baroque floral motifs and daggers with a pleated tulle and lace underskirt. Completing the look is a handmade headpiece with blue and white painted feathers and crystal halo, ivory satin loafers with embroidered lotus and handmade antique glass stick representing the eyes of Saint Lucy.  #MetHeavenlyBodies

On April 23, Lana Del Rey attended the 35th Annual ASCAP Pop Music Awards in Beverly Hills, where she received the ‘Global Impact Award’. Chuck Grant, Emma Elizabeth and Joshua Tillman, Rick Nowells, Ben Mawson and Ed Millet were in attendance to support Lana, in addition to some fans who Lana took some photos with.

In her thank you speech, Lana said: “I just got off the road of four months of touring […] It’s so amazing to be honoured for my writing. I also want to share this tonight with my producer, partner Rick Nowells […] I got a lot of friends and family in the audience and as much as this is an accomplishment, it’s also really cool that I’m sitting at a table with people I work with that I really love. And that I get to be playful everyday with my music, and me and Rick always talk about catching that lightning in the bottle.”

Lookin pretty spooky in the corner, so proud of my sister n Ben and Ed but mostly my sister, for being true and such a strong n necessary force 🌹

On March 13, Lana Del Rey attended the première of the film ‘Flower’, held at the Archlight Theatre in Hollywood, California. Afterwards, Lana went to the after party and was photographed with Zoey Deutch who is the lead actress in ‘Flower’. Lana tweeted saying it’s her new favourite movie!

Candids > 2018 > Leaving the première of ‘Flower’ at the Arclight Theatre in Hollywood, California (March 13)
x—13 pictures were added —x 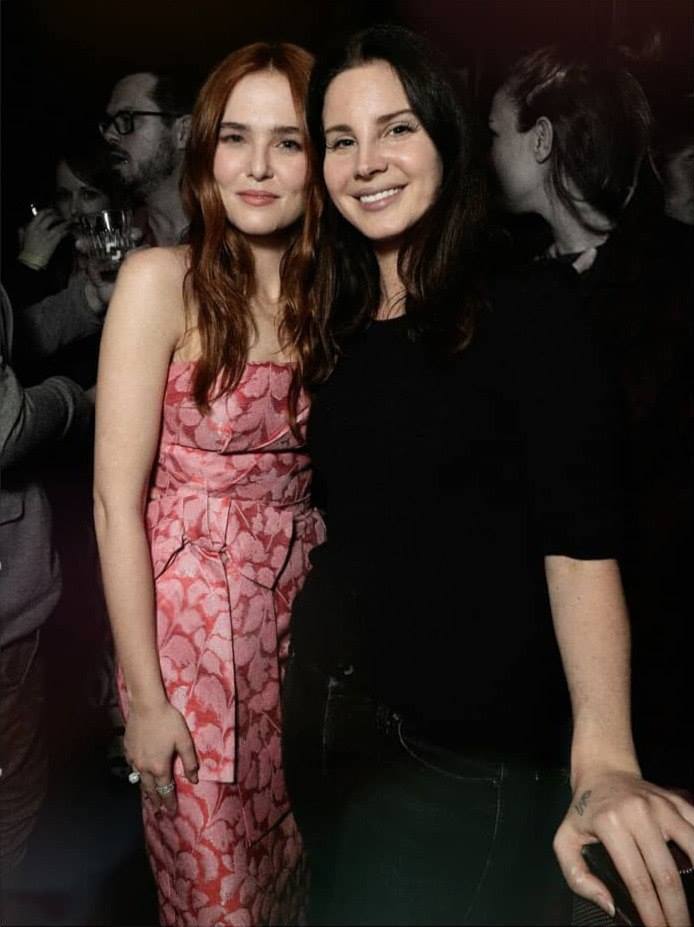 Flower directed by Max Winkler is my new favorite movie 🌷

On March 4, Lana Del Rey attended the Vanity Fair Oscar Party after the 90th Academy Awards at The Wallis Annenberg Center for the Performing Arts in Beverly Hills, California. Lana did not partake in the red carpet photos, but she was photographed with American band HAIM. Lana’s gold, shimmery dress is by Gucci.