“Born To Die” debuts at Number 1 on the UK Official Albums Chart
05
Filed in: News 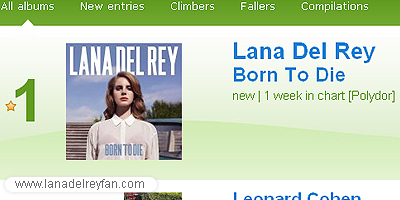 We are pround to announce that Lana Del Rey sold over 117,000 copies, ensuring “Born To Die”  the fastest seller of the year to date, and the first album release of 2012 to break the 100,000 sales milestone week one and debuts at Number 1! TheOfficialCharts.com made a text about Lana’s achievement and you can read it below.

25 year old US singer Lana Del Rey today triumphs over the recent media backlash as major label debut album Born To Die scores first week sales of over 117,000 copies, and outsells the rest of the Top 5 combined. In doing so, Born To Die becomes the fastest seller of the year to date, and the first album release of 2012 to break the 100,000 sales milestone week one and debuts at Number 1 on the Official Albums Chart.

On its way to becoming undoubtedly one of 2012’s biggest debuts, Born To Die follows in the wake of 2011’s upward trends in UK digital music sales.  Last year saw sales of digital albums rise by over 26% year on year, and Lana Del Rey has this week notched up a tidy 50,000 digital album sales alone in Born To Die’s first week of release.  This impressive figure already surpasses Ed Sheeran’s 2011 record as the fastest selling digital debut for his triple platinum album +, though it is British rockers Coldplay who hold the overall digital record – current album Mylo Xylotobecame the first album to top 80,000 downloads in a week upon its release in October 2011, racking up a tally of 83,000 digital sales out of total 208,000.